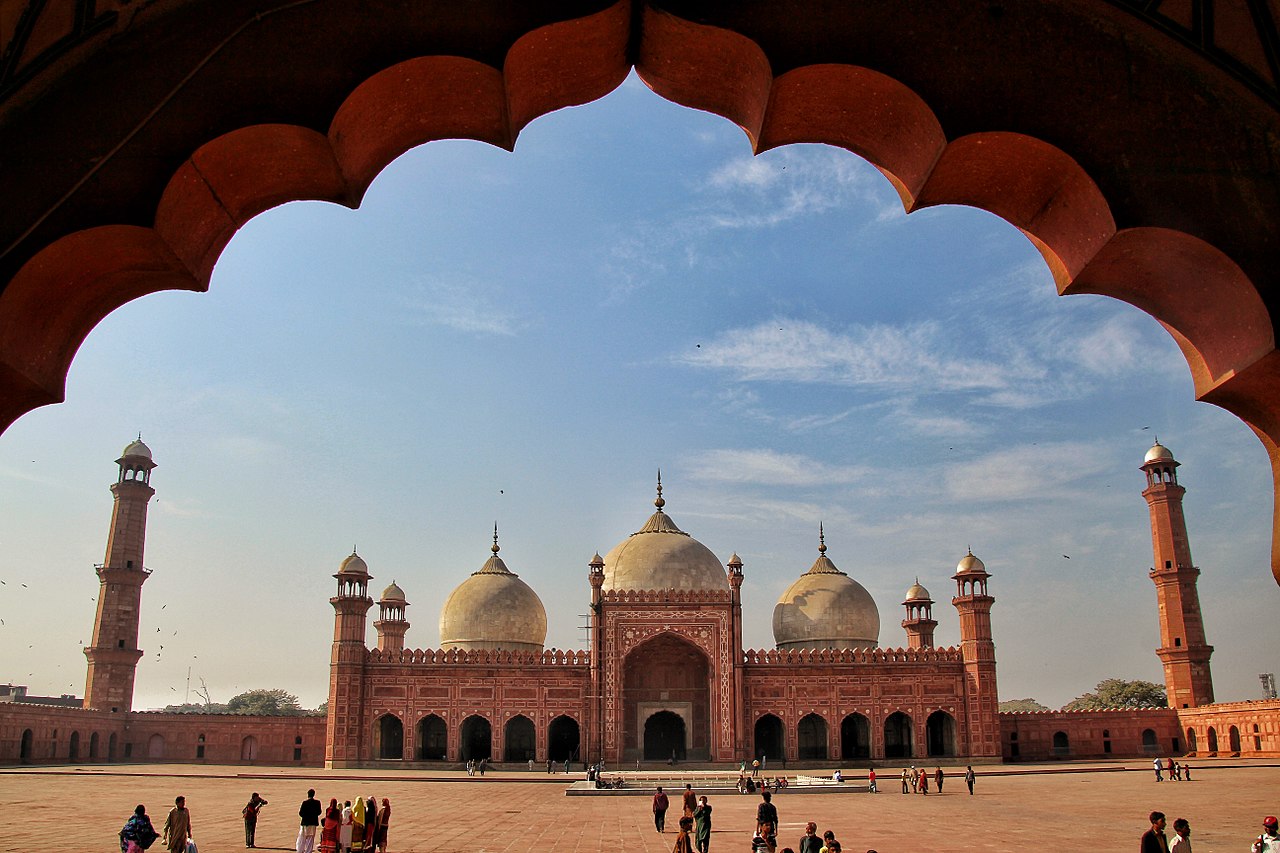 The Badshahi Mosque is a Mughal era masjid in Lahore, capital of the Pakistani province of Punjab, Pakistan. The mosque is located west of Lahore Fort along the outskirts of the Walled City of Lahore, and is widely considered to be one of Lahore's most iconic landmarks. Badshahi Mosque was commissioned by Emperor Aurangzeb in 1671, with construction of the mosque lasting for two years until 1673. The mosque is an important example of Mughal architecture, with an exterior that is decorated with carved red sandstone with marble inlay. It remains the largest and most recent of the grand imperial mosques of the Mughal-era, and is the second-largest mosque in Pakistan. After the fall of the Mughal Empire, the mosque was used as a garrison by the Sikh Empire and the British Empire, and is now one of Pakistan's most iconic sights. 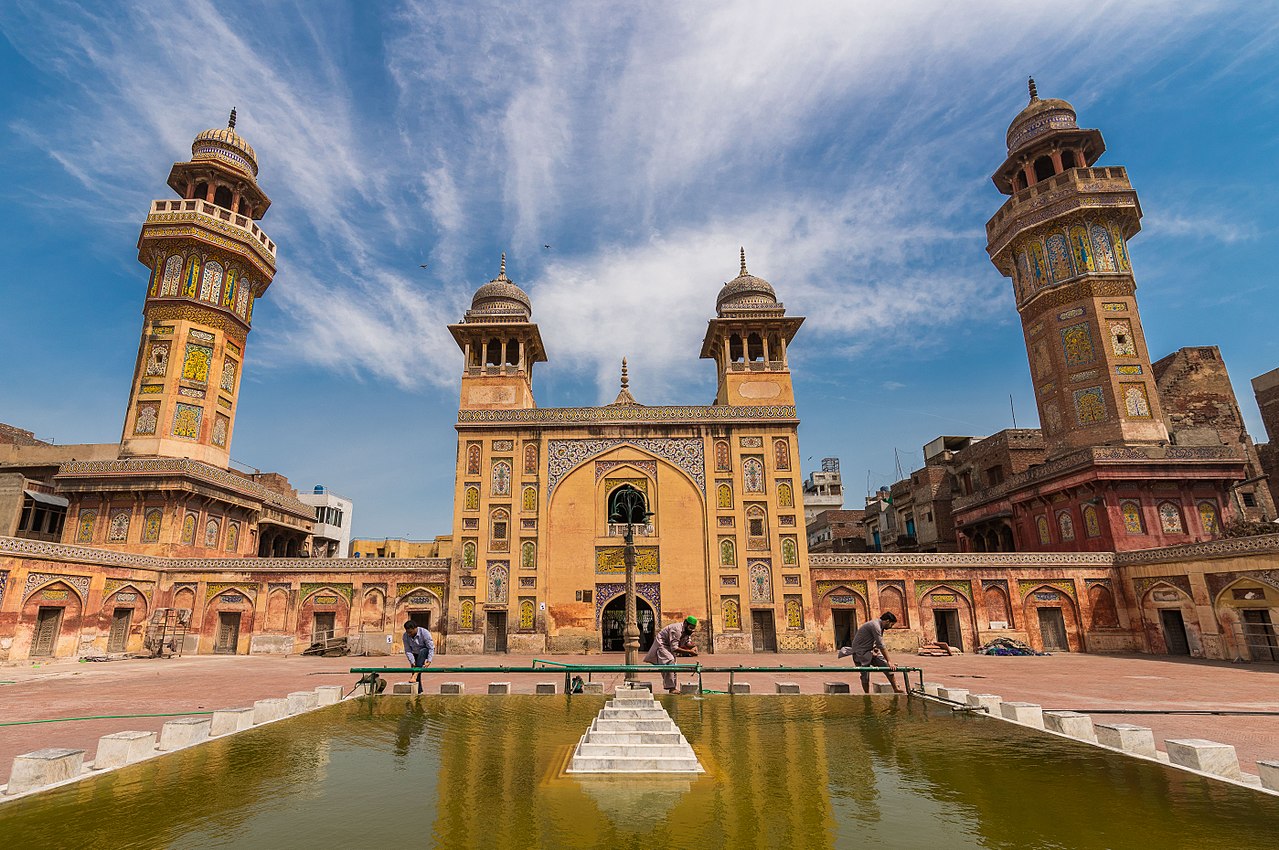 The Wazir Khan Mosque is 17th century mosque located in the city of Lahore, capital of the Pakistani province of Punjab. The mosque was commissioned during the reign of the Mughal Emperor Shah Jahan as part of an ensemble of buildings that also included the nearby Shahi Hammam baths. Construction of Wazir Khan Mosque began in 1634 C.E., and was completed in 1641. Considered to be the most ornately decorated Mughal-era mosque, Wazir Khan Mosque is renowned for its intricate faience tile work known as kashi-kari, as well as its interior surfaces that are almost entirely embellished with elaborate Mughal-era frescoes. The mosque has been under extensive restoration since 2009 under the direction of the Aga Khan Trust for Culture and the Government of Punjab, with contributions from the governments of Germany, Norway, and the United States. 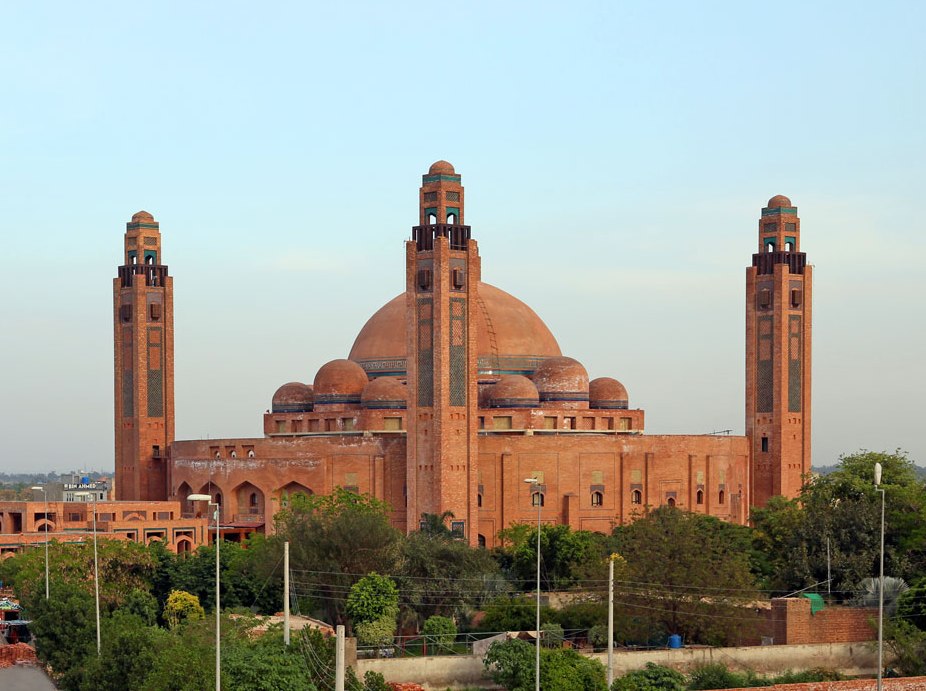 Grand Jamia Mosque Lahore is a mosque located in Bahria Town, Lahore, Pakistan. With a capacity of 70,000 worshippers, it is the third largest mosque in Pakistan and the seventh largest mosque in the world. Designed by Nayyar Ali Dada, it was inaugurated on Eid al-Adha on 6 October 2014. It can accommodate 25,000 worshipers indoors, while the courtyard and corridor leading to the main halls of worship can accommodate a total of 70,000. The architecture is influenced by Badshahi Masjid, Wazir Khan Mosque and Sheikh Zayed Mosque, with construction costs of over 4 billion rupees (or approximately $39 million). The structure comprises four minarets, each 165 ft tall, and a grand dome, which is surrounded by 20 smaller domes. The exterior is surfaced with 4 million handmade Multani tiles. The interior is decorated with custom-made carpets imported from Turkey and over 50 chandeliers imported from Iran. One of the floors consists of an Islamic heritage museum displaying rare Quranic collections, an Islamic library and also an Islamic art gallery with various antique artifacts. Over four million Multani handcrafted mosaic tiles cover the surface area of the mosque.