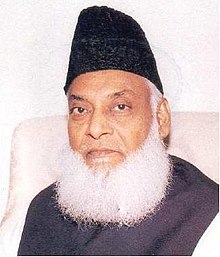 Israr Ahmed (26 April 1932 – 14 April 2010; Msc, MBBS) was a Pakistani Islamic theologian, philosopher, and Islamic scholar who was followed particularly in South Asia as   well as by South Asian Muslims in the Middle East, Western Europe, and North America. He was the founder of the Tanzeem-e-Islami and an offshoot activist of the rightist Jamaat-e-Islami.Ahmed wrote and published 60 books on different aspects of Islam and religion, nine of which were translated into English. 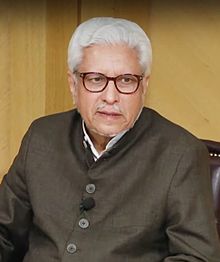 Javed Ahmad Ghamidi (born 1952) is a Pakistani Islamic modernist theologist Quran scholar and exegete, and educationist. He is a student of the Islamic scholar and exegete Amin Ahsan Islahi, Ghamidi is the founder of Al-Mawrid Institute of Islamic Sciences and its sister organisation Danish Sara. He became a member of Council of Islamic Ideology on 28 January 2006 for a couple of years, a constitutional body responsible for giving legal advice on Islamic issues to Pakistan Government and the Parliament. He has also taught at the Civil Services Academy from 1980 until 1991. He is running an intellectual movement similar to Wastiyya in Egypt on the popular electronic media of Pakistan.

Mufti Sarfraz Ahmed Naeemi Shaheed, (16 February 1948 – 12 June 2009) was a leading Sunni Islamic cleric from Pakistan who was well known for his moderate and anti-terrorist views. He was killed in a suicide bombing in Jamia Naeemia Lahore, Lahore, Pakistan on 12 June 2009, after publicly denouncing the Tehrik-i-Taliban's terrorist actions and ideologies as unislamic. 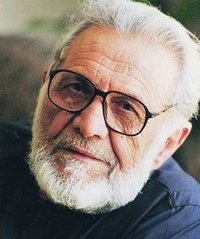 Ashfaq Ahmed (22 August 1925 – 7 September 2004) was a writer, playwright and broadcaster from Pakistan. He wrote several books in Urdu. His works included novels, short stories and plays for television and radio. He was awarded President's Pride of Performance and Sitara-i-Imtiaz for meritorious services in the field of literature and broadcasting. 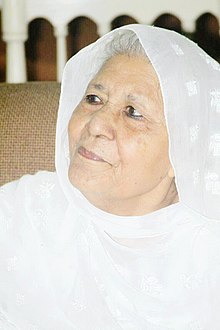 Bano Qudsia (28 November 1928 – 4 February 2017), also known as Bano Aapa, was a Pakistani novelist, playwright and spiritualist. She wrote literature in Urdu, producing novels, dramas and short stories. Qudsia is best known for her novel Raja Gidh. Qudsia also wrote for television and stage in both Urdu and Punjabi languages. Her play Aadhi Baat has been called "a classic". Bano Qudsia died in Lahore on 4 February 2017. 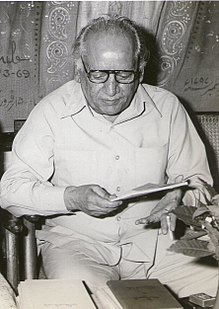 Faiz Ahmad Faiz (13 February 1911 – 20 November 1984) was a Pakistani leftist poet and author, and one of the most celebrated writers of the Urdu language. Among other accolades, Faiz was nominated for Nobel Prize in Literature and won the Lenin Peace Prize.