Abu ’l-Ḥasan ʿAlī b. ʿUthmān b. ʿAlī al-Ghaznawī al-Jullābī al-Hujwīrī (c. 1009-1072/77), known as ʿAlī al-Hujwīrī or al-Hujwīrī (also spelt Hajweri, Hajveri, or Hajvery) for short, or reverentially as Shaykh Syed ʿAlī al-Hujwīrī or as Dātā Ganj Bakhsh by Muslims of the Indian subcontinent, was an 11th-century Ghaznian-Persian Sunni Muslim mystic, theologian, and preacher who became famous for composing the Kashf al-maḥjūb (Unveiling of the Hidden), which is considered the "earliest formal treatise" on Sufism in Persian. Ali Hujwiri is believed to have contributed "significantly" to the spread of Islam in South Asia through his preaching, with one historian describing him as "one of the most important figures to have spread Islam in the Indian subcontinent." 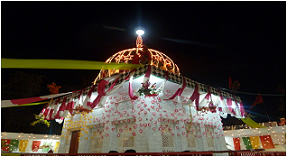 Shah Hussain was a 16th century Punjabi Sufi poet who is regarded as a pioneer of the Kafi form of Punjabi poetry. Hussain's love for a Hindu boy named "Madho" has resulted in them being referred to as a single person with the composite name of "Madho Lal Hussain".

Shah Hussain is also often known as Shah Hussain Faqir - Faqir meaning Dervish ( mendicant ) and Shah means King. So due to his extremely humble Sufi personality, people called him The Dervish King, a person who was a King and a Dervish at the same time. He was son of Sayed Mohay-ud-Din Urf Qadir Sher) Shah Pur District Layyah Shah Hussain (Madhu Lal Hussain) is Kazmi Sayed but the family of Sayed Mohay-ud-Din is called Mashooq Allah Potra. his history is available in Deputy Commissioner Office Muzaffar Garh. 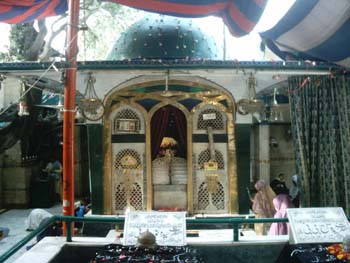 Bibi Pak Daman is the mausoleum of Ruqayyah bint Ali located in Lahore, Punjab, Pakistan. Legend has it that it holds the graves of six ladies from Muhammad's household (Ahl Al-Bayt). Ruqayyah bint Ali ibn Abu Talib was the daughter of Muhammad's cousin and son-in-law Ali ibn Abu Talib with his wife Sahba' bint Rabi'a al-Taghlibiyya.Ruqayah bint Ali was the Half sister of Al-Abbas ibn Ali and also the wife of Muslim ibn Aqeel (emissary of third Shi'a Imam Husayn ibn Ali to Kufah). Others are said to be Muslim ibn Aqil's sister and daughters. It is said that these ladies came here after the event of the battle of Karbala on the 10th day of the month of Muharram in 61 AH (October 10, AD 680). 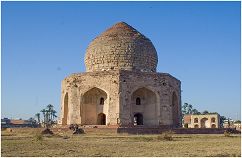 The Tomb of Asif Khan is a 17th century mausoleum located in Shahdara Bagh, in the city of Lahore, Punjab. It was built for the Mughal statesman Mirza Abul Hassan Jah, who was titled Asif Khan. Asif Khan was brother of Nur Jahan, and brother-in-law to the Mughal Emperor Jahangir. Asif Khan's tomb is located adjacent to the Tomb of Jahangir, and near the Tomb of Nur Jahan. Asif Khan's tomb was built in a Central Asian architectural style, and stands in the centre of a Persian-style Charbagh garden. 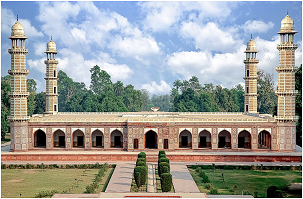 The Tomb of Jahangir is a 17th century mausoleum built for the Mughal Emperor Jahangir. The mausoleum dates from 1637, and is located in Shahdara Bagh in Lahore, Punjab, Pakistan, along the banks of the Ravi River. The site is famous for its interiors that are extensively embellished with frescoes and marble, and its exterior that is richly decorated with pietra dura. The tomb, along with the adjacent Akbari Sarai and the Tomb of Asif Khan, are part of an ensemble currently on the tentative list for UNESCO World Heritage status. 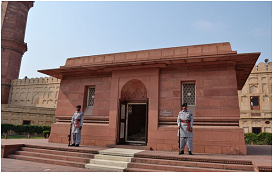 The Tomb of Allama Muhammad Iqbal, or Mazaar-e-Iqbal is a mausoleum located within the Hazuri Bagh, in the Pakistani city of Lahore, capital of Punjab province.Iqbal was one of the major inspirations behind the Pakistan Movement, and is revered in Pakistan as Muffakir-e-Pakistan (The Thinker of Pakistan) or Shair-e-Mashriq (The Poet of the East). Iqbal died on 21 April 1938 in Lahore at the age of 60. Thousands of visitors come to the mausoleum every day to pay their respects to the poet-philosopher. It is said that Mustafa Kemal Atatürk sent earth collected from Maulana Rumi's tomb to be sprinkled on this grave. 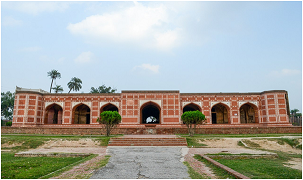 The Tomb of Nur Jahan is a 17th-century mausoleum in Lahore, Pakistan, that was built for the Mughal empress Nur Jahan. The tomb's marble was plundered during the Sikh era in 18th century for use at the Golden Temple in Amritsar. The red sandstone mausoleum, along with the nearby tomb of Jahangir, tomb of Asif Khan, and Akbari Sarai, forms part of an ensemble of Mughal monuments in Lahore's Shahdara Bagh. 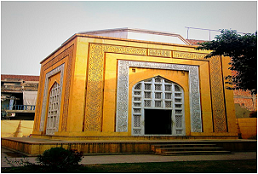 Quṭb al-Din Aibak was born to Turkic parents in Turkistan. In his childhood, Aibak was sold as a slave and raised at Nishapur, Persia, where he was purchased by the local Qazi. After the death of his master, he was sold by his master's son and eventually became a slave of Muhammad of Ghor who made him the Amir-i-Akhur, the Master of Slave.

Eventually, Aibak was appointed to military command and became an able general of Muhammad of Ghor. In 1193 and after conquering Delhi, his master returned to Khorāsān and left the consolidation of the Ghūrid conquests in northwest India to him. With his headquarters at Delhi, Aibak subjugated areas between the Ganges (Ganga) and Yamuna (Jamuna) rivers. He then turned his attention to the Rajputs who were still resisting Ghūrid domination. In 1195–1203, he mounted campaigns against their strongholds, while Ghuri's other lieutenant Muhammad bin Bakhtiyar Khilji conquered Bihar and Bengal.